Once upon a time (in 2004) Marnix Bochove, then working as a senior software developer at a large financial institution, realized that very often he was programming the same kind of code over and over again. So he began to investigate the possibilities of approaching software production just like production in the manufacturing world. Hence the name of the current company: MetaFactory. The aim was to create a software production facility, far more versatile than a common software generator. Most generators can generate rather standard solutions, but often they create ugly code. The idea was that the developer should keep total control over the produced code which should be of eminent quality.

The years went by. Now there is the MetaFactory Composer. A highly versatile production environment which you can integrate into your development processes to an extend that you can choose yourself. It can generate source code in different languages and is independent of any framework.

Every software system bigger than ‘Hello World’ contains pieces of rather generic logic that occur repeatedly in the sources. These pieces are called ‘patterns’. Using the MetaFactory Composer you once create a code instruction for a pattern. Then you can generate all occurrences of the pattern with a push on a button. You might expect that all software developers are yearning for a piece of equipment like this.

I worked with many engineers, man and women: electrical, mechanical, hydraulical, software, maintenance and documentation engineers. They appear to have one thing in common: a string of Gyro Gearloose’s (in Dutch: Willie Wortel) genes in their DNA. Deep down they want to invent things. And find the perfect solution. But after having found the perfect way, circumstances change (for instance by change requests). And a new quest for the best solution can begin.

The old solutions are buried in the code already created. And remain there until major issues force the engineer to update the deprecated code. And this is what software engineers hate (I know because I’ve been one myself): digging through a multitude of (somebody else’s) source files to get the damned thing working again.

Most software engineers are not eager to leave their cosy environment with their own language, frameworks, programming style and habits. But MetaFactory offers opportunities to improve programming continuously, at a high productivity level and to be more flexible towards change requests and technology changes.

This story is about why Metafactory can be your next step in the professionalization of software engineering.

Each year the Standish Group https://www.standishgroup.com publishes the results of a survey on how succesful ICT projects are. According to interviewed ICT managers the most important success factors for a software project are:

We know that already for -say- 35 years, but still about 50% of the software projects fail. So there must be other issues that are overlooked.

In their Developers Survey of 2016 (49.521 respondents worldwide) Stack Overflow asked What are your challenges at work?.

So what developers need is:

Efficient Development Processes, with tooling that:

1.1.2. The conventional way of development

Looking at Fig. 1.2 we see the following:

There’s a big difference between the needs of an individual user who needs automation for his work processes and the needs of a professional software developer.

The individual user is not interested in code or code quality. He or she is primarily focussed on quick results and the ability to make rapid modifications when questions or requests change. And is not inclined to write many lines of source code. If you want to support this user with automation, a Low Code Solution might be a good option.

The professional developer’s job however is to create source code. And to keep control over it.

In general he or she will be involved in larger projects where the importance of maintainability and code quality grow with increasing lifespan of the project’s endproduct.

If a project’s size is relatively small (little repetition, not too many lines of code) and the demands for code quality and maintainability are moderate, the conventional way of manual programming may suit well. But if the rate of repetition and the demands for high productivity, high code quality and maintainability are higher, the effort to keep control over the quality (bugfixing, consistency, programming style) of a large number of sources increases rapidly. Then conventional programming is not a workable method any more.

Then automation with the MetaFactory Composer is the better way. It eliminates repetition, creates high productivity, supports continuous improvement of the code and keeps the code uniform and structured.

The Composer is a source code production environment. It can create:

The product is source code. Not more, not less. The produced code can be combined with any other code.

So the Composer and its output can blend in with any existing development process. If you like it can take control over the whole process. But if you don’t, you can restrict it to the production of a few files. In any case you’re still the owner of the code and you keep for 100% control over it. You can keep using the frameworks that you are comfortable with.

It’s all about patterns. Patterns are generic, often repeating pieces of code. Take a REST interface, for instance. If you use REST interfaces, you need one for almost every object (entity) in your system. So you end up writing many REST interfaces that are only slightly different. That REST interface we call a ‘pattern’. 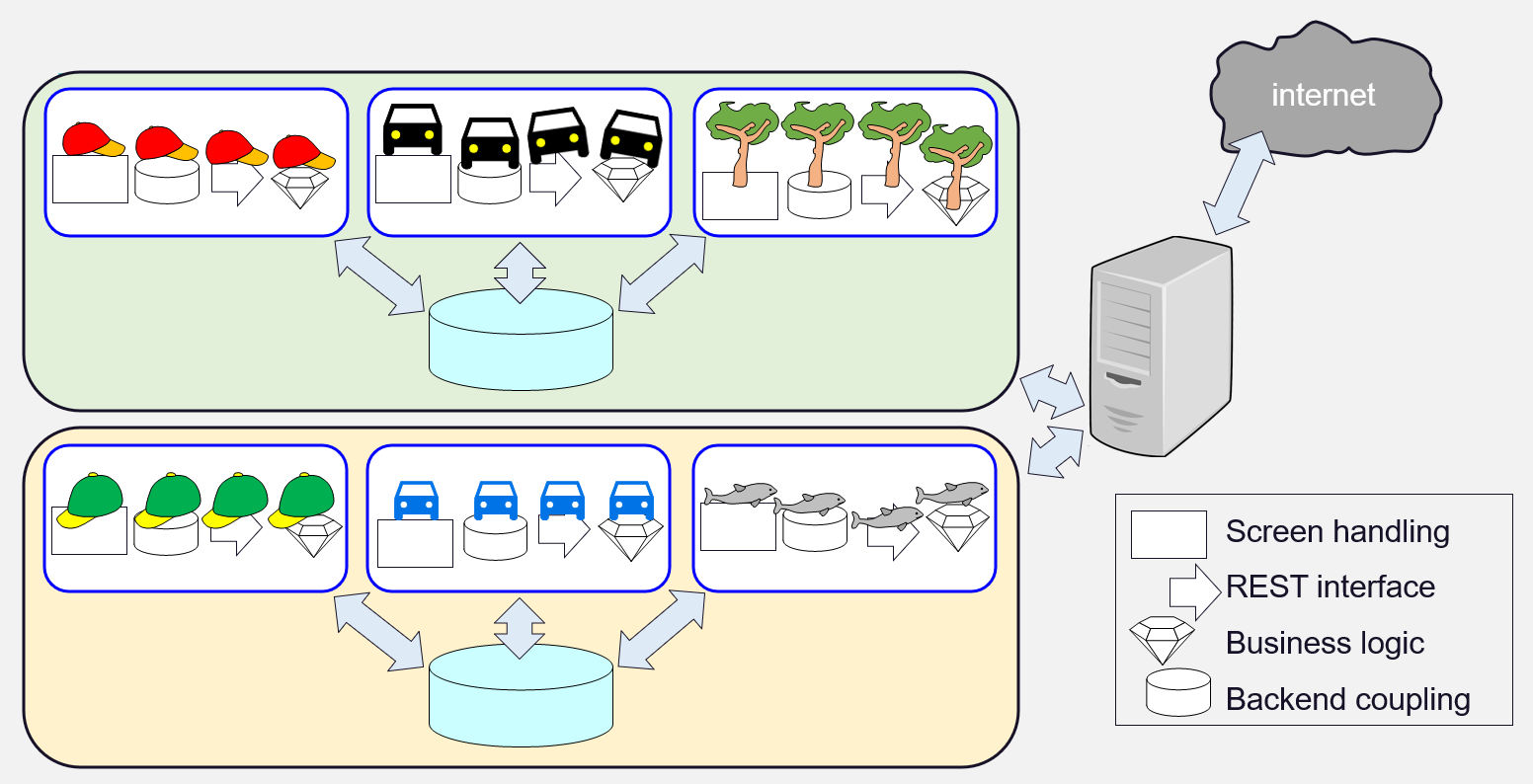 In Fig. 1.5 we see two systems, connected to the internet via a WEBserver. Both make use of a database. In the system on top, there live three objects: oranje cap, black car and tree. Each of them needs screen handling functions, a REST interface, business logic, and an interface to the backend. These 4 we call ‘patterns’. Except for the business logic, which will be very specific, the other 3 (screen handling, REST interface and backend coupling) are applicable to all objects (entities) in the system.

And when there is another system with similar objects, as on the bottom of the figure, the same patterns are applicable there too. Patterns are not necessarily confined to a single project or system.

One code Instruction for an unlimited number of objects?

For the sake of readability we omitted some details. But there are more mechanisms to tune the generation process. The MetaModel and objects can contain meta-data, which control the Code Instruction. And a ‘hook’ for instance enables you to influence a Code Instruction on Project level.

More about this stuff in the next chapters. 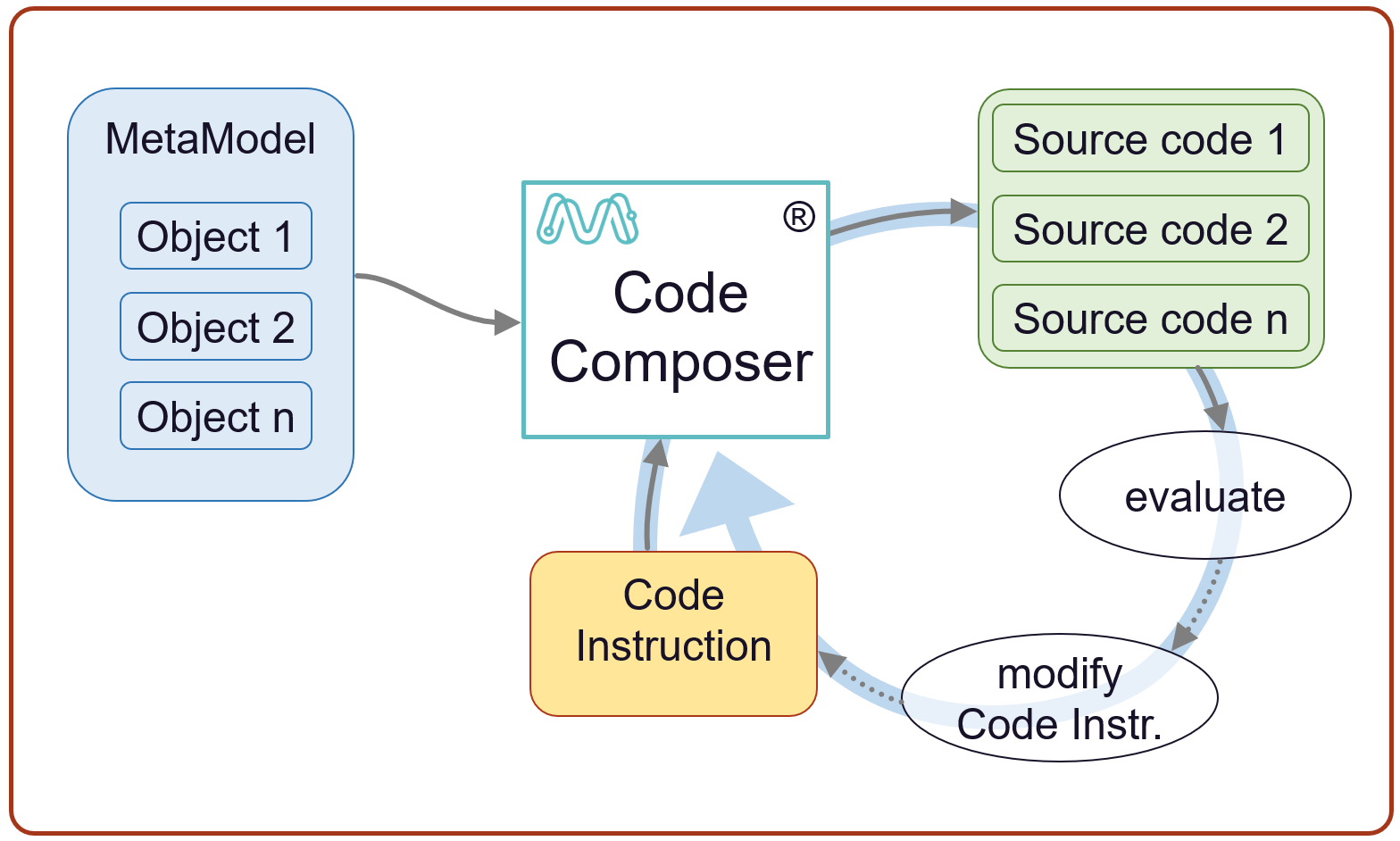 The real power is in the interactive character of the process. Whether you update a Code Instruction to honour a change request, to fix a bug, as a result of changing technology or new insights, it does not matter. With a push on a button you can generate all dependent sources again.

At each iteration the quality of all sources will increase. Progressive insight and Best Practices are saved in the Code Instruction. And can be applied in other projects at once.

In every project you will find patterns. In Fig. 1.7 we see 3 objects (cap, car, tree) and Code Instructions for 3 patterns (screen, database and Rest). Usually the Business logic will be too object-specific to be regarded as a pattern and will be realized by means of a ‘hook’. 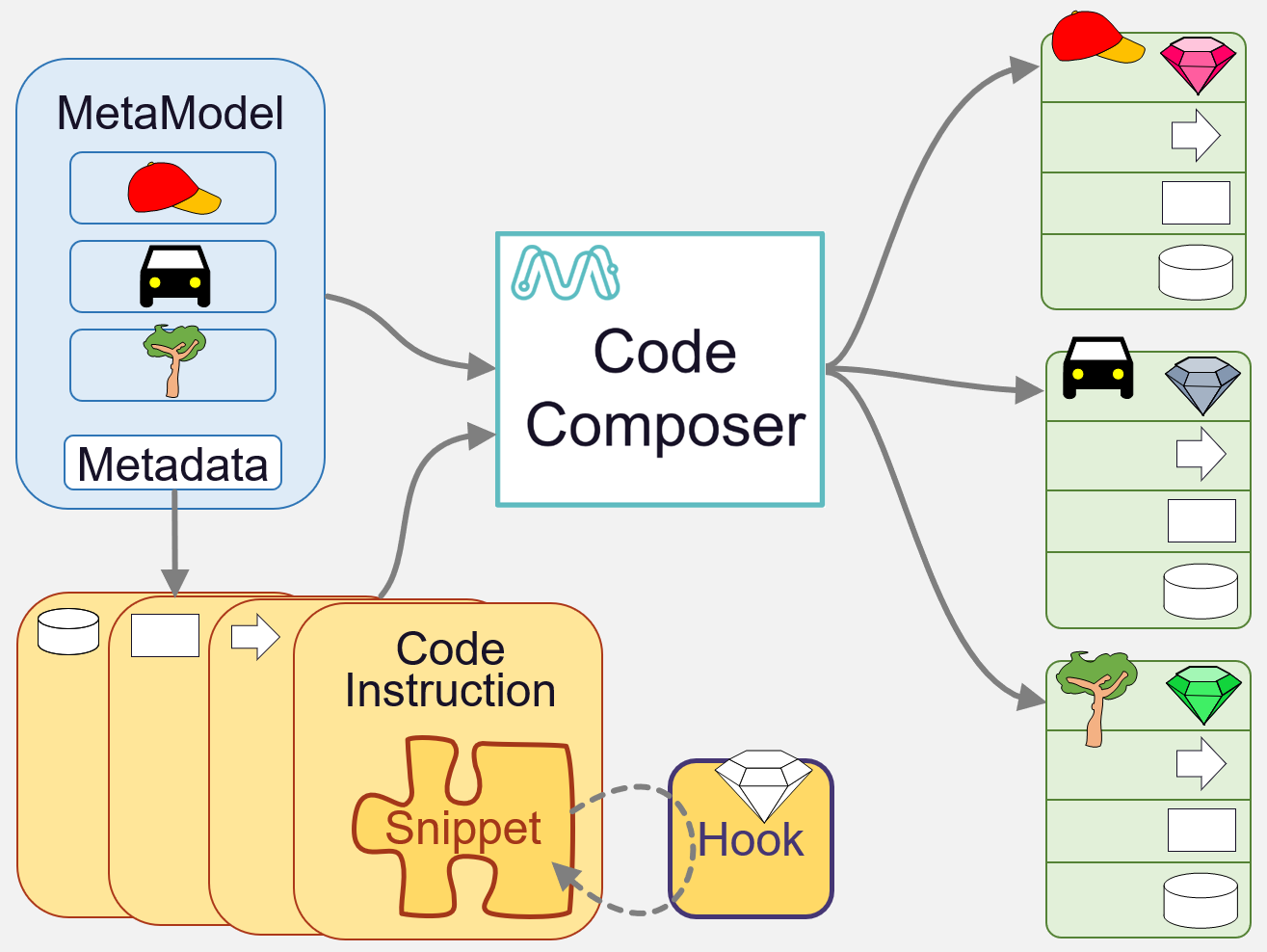 With a Code instruction for every pattern the Composer will generate 12 sources: 4 for each object.

Regarding coding, the focus moves to analysis and working on a next abstraction level. You need to get used to it.